Within three plays of the CFL season kicking off, controversy had already struck (quite literally in fact). Simoni Lawrence’s headshot on a sliding Zach Collaros enraged fans instantly and sentiment has not cooled as a two game suspension was announced and an appeal was filed. Emotion is understandable, the hit was illegal and another head injury for Collaros could spell the end of his career, but was the hit truly as despicable as the fury would suggest? Lets take a step back and look at the factors that make up the hit that shook the CFL world.

It all starts with a broken pass play and a collapsing pocket that causes Collaros to step up in the pocket and make a break for it with Julian Howsare hot on his tail. This immediately puts him on a collision course with a converging Simoni Lawrence.

It doesn’t take long for the fate of this play to be sealed. With about 5 yards of separation, Collaros begins his decision to slide. This happens virtually simultaneously with Lawrence’s decision to project his body into the tackle.

Simply put, going full speed and being airborne , Lawrence doesn’t have enough time to avoid the contact. It takes less than 1 second for Collaros to begin his slide to Lawrence’s contact. The go/no-go processing speed of a human being would make the adjustment virtually impossible.

While Lawrence likely intended to place a powerful body shot, Collaros’ head enters his initial aiming point. You can also see Lawrence attempt to twist away from the hit in an unusual way, knowing he couldn’t overshoot the contact, ending up on his back to the left of Collaros versus to the right where natural momentum would carry him.

None of this is to say that the hit wasn’t, it was. The 25 yard penalty, and even the suspension, were entirely merited. But a hit can be illegal without being dirty and I do not believe there was any intention for undue harm on the part of Lawrence. While some have pointed to another headshot by Lawrence on William Powell as evidence of ill intent, that play was far from an easy tackling read either, with Lawrence anticipating Powell breaking a tackle that he didn’t, and looks for worse slowed down in slow motion than it does in real time.

I would argue that Simoni Lawrence didn’t even commit the dirtiest hit of the week, with Cory Greenwood’s late shot on Mossis Madu being far more egregious and avoidable. Its also important to note Collaros’ mistakes on the play. Collaros’ slide is a poor one, done when contact had already been initiated be Howsare and keeps his head elevated longer than it should have been.

Collaros fails to extend and lands firmly on the front side of his knee which props him up, slows his slide and exposes himself. 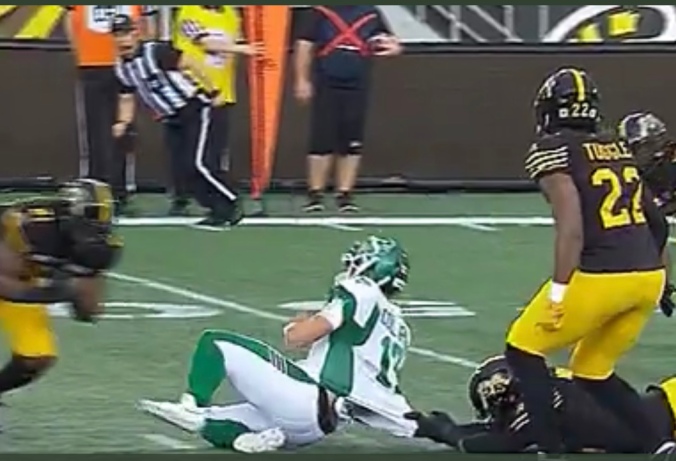 This contraction of the body and elevation of the head means that even if Lawrence had attempted to overshoot the tackle, he would not have been able to. Compare this to the form of the world’s best slider, NFL QB Russell Wilson.

Wilson extends his top leg and makes contact with the back side of the knee, getting his body low to the ground and sliding for distance. He never fails to get his shoulders to the turf and protect his head.

Wilson gets his sliding technique from being a professional baseball player but is shockingly unique among quarterbacks in proficiency in this skill. Its not Collaros’ fault that he performed a poor slide. Despite sliding being a modern day expectation for professional quarterbacks, its rarely, if ever, practiced. This lack of teaching is even more in excusable given that many quarterbacks never slide until the professional ranks. In recent years, NFL QBs Mitch Trubisky, Josh Allen and Joe Flacco have all been injured due to poor slides. I would add Zach Collaros to that list of names.

So the hit that gained our collective attention this week was many things. Illegal? Absolutely. Unavoidable? Probably. Ill intended? Unlikely. The result of a bad slide? Almost certainly. But since we are all tuned in, there is a conversation that needs to be had about this hit that goes beyond headshots. Hits to the head will always make the headlines but they are the result of the problem, not the problem itself. There is something fundamentally wrong with the way players tackle in professional football. It happens dozens of times a game but only gains attention when it causes a concussion. Every hit discussed in this article was a result of a torpedo style tackle with no wrap, something that is completely antithetical to the technique of proper tackling taught to every child who plays the game. It puts both the tackler and the ball carrier at risk, while making in play adjustments to the tackle virtually impossible, not to mention a higher propensity for missed tackles. Alex Singleton put it best when he said in response to the Lawrence hit “I’ve never led with my head from seven yards away and not known what I was going to hit. If I’m doing that I know I’m going to hurt somebody.” Except those type of hits happen hundreds of times a year without repercussions, simply because the tackler was lucky enough to avoid contacting a punishable area. If we truly care about player safety, we need to go beyond simply punishing hits to the head. Tackles without an attempted wrap must become penalized, just as they are in rugby. That simple rule change will reduce the amount of headshots that need to be penalized and ultimately make the game safer for everyone.