The success of a CFL team is only as good as the quality of their Canadian offensive line content. That all hinges on Draft day and here is how I rate those most important players.

Seldon possesses nice height and length, using long arms effectively from the tackle position. He moves well but needs a lot of development. Needs some more sand in his pants if he is to compete at the next level.

Kochisarli has nice size and has shown the versatility to play a variety of roles along a strong Alberta offensive line. He lacks the exceptional feet and strong hands of past Golden Bears prospects but could be developed for a depth role. 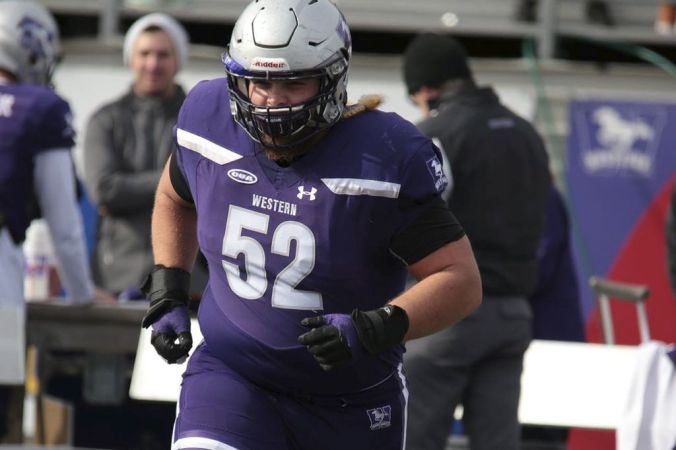 Bouchard plays with extreme power and aggression, consistently putting opponents on their backs. He tests much slower than you would ideally like but shows greater aptitude as a puller on tape than his testing numbers might suggest.

With impressive size and reach, Simba had many scouts drooling leading up to this season. He is a dominant run blocker but struggles against any sort of speed in the pass game. He tested at a level of athleticism for which there is no recent comparable for CFL success, with an almost six second forty. Simba will need to lose some weight and gain some speed to capitalize on his potential at the next level.

Roy has the body type that CFL teams will fall in love with but the tape makes it very clear that 2018 was his first season playing offensive line. His footwork is sloppy and his hand technique is extremely raw, but he possesses enough strength and athleticism to more than compensate at the USports level. He is a strong developmental prospect with a ton of potential.

Another big man with a lot of early hype, Thomassin tested less spectacularly than you would like for a top prospect. He is a steady blocker on tape who is difficult to defeat but equally doesn’t truly blow opponents off the ball like he should at his size. He will need to develop at the professional level and probably cut some weight to be more effective. 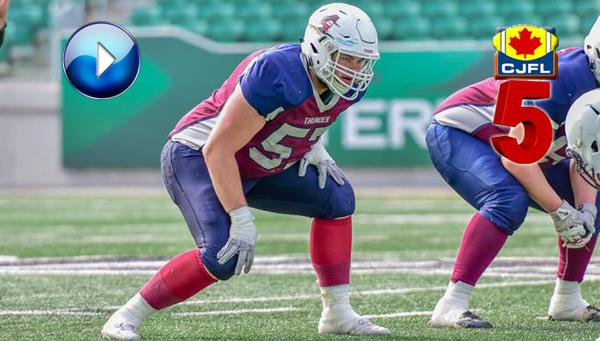 Teskey has an impressive body and has already spent some time with the Roughriders. Its easy to see why, Teskey has good feet and aggressive hands that shine in the PFC. He is a tricky blocker who is especially adept at winning hand fights and using his opponents strengths against them.

McMorris has an intriguing frame that is backed up by being a driver and a finisher on the field. While he can get caught clutching at times and needs to improve his pad level, McMorris has all the elements necessary to be a steal in the Draft. 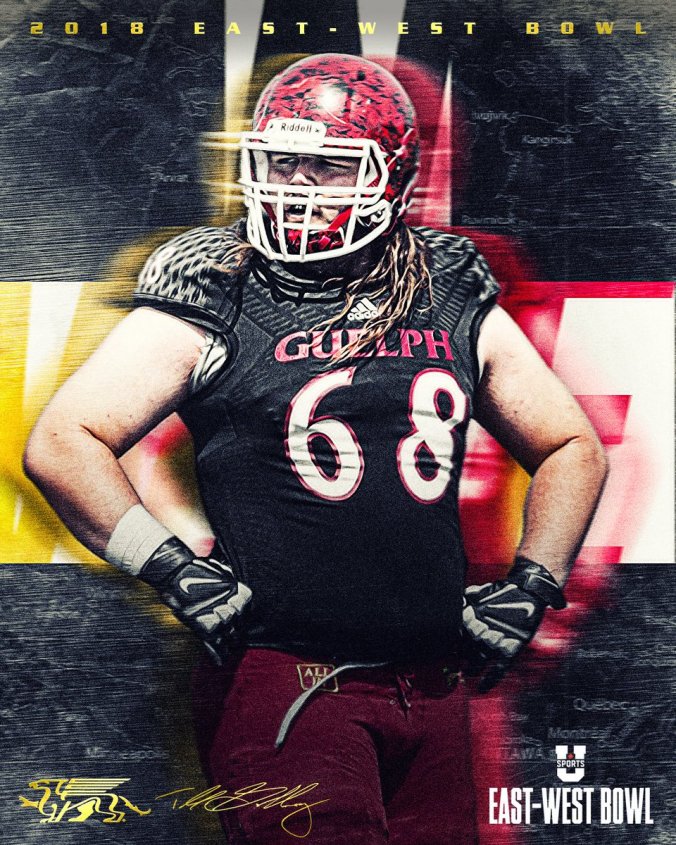 Starczala is a big brawler with surprisingly nimble footwork. The pop of his initial contact is visible on film. He will thrive moving inside in the CFL and will provide excellent depth for the team that drafts him.

Omara is a natural pass blocker and possesses one of the prettiest quick sets I have ever seen. He is a capable run blocker as well but can struggle with pad level and rarely blows people off the ball. Lucky for him, it’s a passing game and he will have tremendous value come draft day.

One of the drafts most athletic linemen, Williams moves exceptionally well but still looks raw on tape. He gets effectively to the second level and showed a propensity to take every possible rep at every possible position during US college all-star game practices. Teams should fall in love with this attitude and potential.

With exceptional length and long arms, Saxelid is a team’s dream. He also shows impressive athleticism and explosion in his testing. Unfortunately, like many big men, Saxelid shows a lack of bend on tape and often looked stiff in comparison to his opponents. Despite his size being perfect for tackle, he will likely need to learn how to be a guard at the next level.

Long, strong and mobile, Guthrie moves with a fluidity more commonly found in so-called “skill position” players. He excels at leading screens but is just at good blowing opponents off the line. Though he may require some seasoning, Guthrie could play tackle in the CFL.

A short and stout center, Jerome could be the hidden gem of this draft. He plays with a nasty edge, uses angles and leverage extremely well, and is effective on traps and pulls. Well-rounded blockers of his calibre rarely don’t receive invites to the National Combine, and don’t be surprised if one or more teams are looking to surprise the field and take him early. 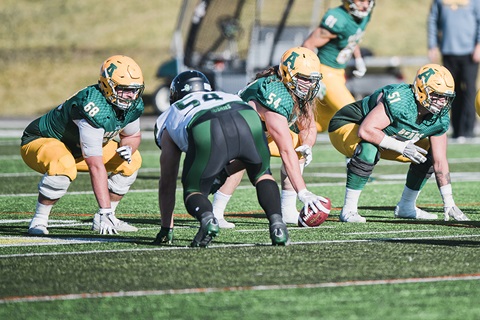 Though he lacks ideal size, Harke is a true center. He is bull-strong, as 32 bench reps can attest, and plays extremely mean. Attitude is paramount on the offensive line and Harke will rip your face off.

While I’m often hesitant to praise NCAA prospects with limited starts, Richards’ senior year tape impressed even me. He is a mountainous man who is surprisingly athletic, playing tackle for four games at Oklahoma State. He is a CFL guard and will impress as a tenacious run blocker and dancing bear as a pass protector. 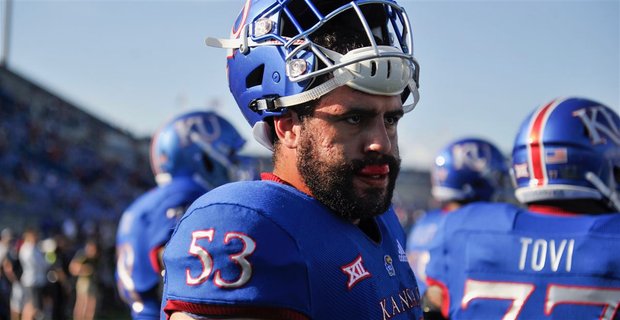 Fontana is a smooth moving center that tests extremely well. He fits best in a zone blocking scheme, using his mobility to put his opponents on the back foot. In the NCAA, Fontana rarely physically dominated those across from him but equally was rarely beaten, the type of consistent success that you look for in a CFL prospect. 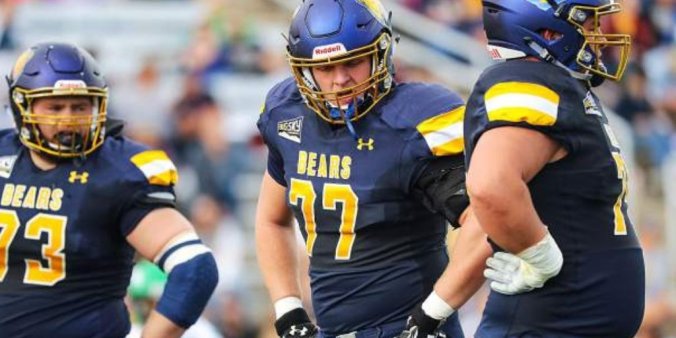 The first ex-teammate I have ever evaluated (White Rock Titans Junior Bantam for life!), Wilkinson is exceptionally technically sound as a blocker. He can play both guard and tackle, showing the intelligence on tape to diagnose blitzes and pick up twists. His footwork is exceptional, and he finishes plays all the way to the whistle.

Desjarlais is a smooth and dominating lineman who works over his opponents all game long and breaks their spirit. He is an ideal CFL lineman that will be an exceptional guard, with the athleticism to pull and the strength to dominate.

While many prefer Desjarlais, for my money Gibbon is the best lineman in this class. He has gorgeous footwork and a nasty edge to his game, both of which will translate at the next level. He is an incredible blocker in space and could legitimately play tackle in the CFL, though he could also be an All-Star at guard.