In putting out my positional draft prospect lists, I relied on an algorithm to combine testing scores with my own film evaluation of a prospect. I was pleased with the results but there are always a few players who don’t fit the mould so here is my final prospects list. The 15 players listed here are in no particular order. They missed out on my lists for various reasons (late entries, poor testing, strong position groups or specialized positions) but could see their names called on draft day. 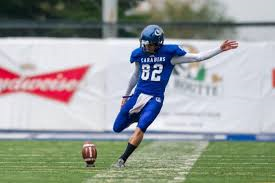 Field position changing punter who can kick field goals in a pinch. The best all around tester in this class, an athlete who could be lethal on fakes and could contribute as a cover man when not kicking. Impressed me when he played for both teams at the East-West Bowl.

Quality longsnapper who can make an instant impact. Tight spiral and accurate. Gets down the field surprisingly quickly for his size.

A big body with a high motor. Dropped out of my top 15 DLs because the algorithm punished his slow testing numbers. Vicious rip move and pistons for legs. A talented run stuffer who given a chance could be a real diamond in the rough.

A monster in the middle in the OUA, racking up tackles and accumulating a surprising number of interceptions. Was unable to bench at the Regional Combine to show off his strength and tested very slow. The tape is flattering but he might not be able to go sideline to sideline on a pro field. 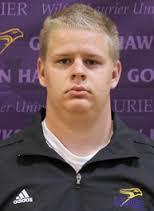 Good late round developmental lineman. Tested well at the Regional combine, just needs to work on his strength. Love his aggression, really wants to go and hit people. Good hands and always finishes his blocks.

A former All-Canadian with the AUS asterisk. He looks raw on film with some untapped potential but tested weak and slow. A team may wish to take a flyer on him as a long snapper and see if anything else can develop. 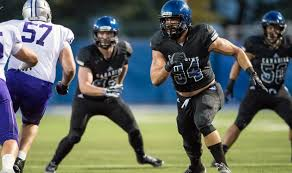 Member of that fearsome montreal D-line. Tested well at the Regional Combine and has 3 RSEQ All-Star nods to his name. Strong and fast off the edge but never goes from a three point stance and runs too high. Has tools for a coach to work with.

A walk-on who did not play much. Shows some flashes on tape but that is limited. Versatile, a seemingly sure tackler and fast enough to play special teams. Could be used at safety and have an impact like a Kevin Francis last year but not as quick.

Only National Combine invitee not to make one of my Top Prospect lists. Scouts loved his film in season. A big place holder with a quick first step and a deceptively quick hands on the pass rush. Tested as one of the worst ever. Dreadfully slow and a weak bench to boot. His draft stock took a huge tumble.

Big bodied slotback with sure hands. Can stretch the field, catch in traffic and block like a beast. Biggest concern is slow 40 time over 5 seconds but he is a gamer who will eventually contribute on offence and brings special teams value.

A powerful rusher whose mediocre bench numbers don’t seem to translate on tape. Can move inside or out. Has as high a motor and a bigger frame than his touted teammate Connor McGough. Brilliant at batting down balls with reactionary hands.

Another pseudo-Canadian to enter the draft. Has had a successful career in Arena Football with brief NFL stints. A 26 year old who can step in right away as a rotational player. Needs to lose weight and adjust to the larger CFL field.

A new convert to DB from receiver. Excellent special teams player, aggressive in kick coverage and a good blocker. Still learning coverage but thinks like a receiver. Has size and good testing numbers, which makes him an intriguing late round pick. 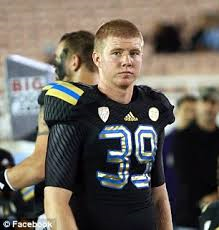 Punter with a huge leg and NCAA pedigree. Will excel with wider/longer field and put up plenty of rouges. Unlikely and probably undeserving of draft consideration after his indefinite fsuspension from UCLA football after being the subject of an unsuccessful rape case in 2015. Could bring a firestorm on any team that takes him.

Big and strong. Surprisingly good in kick coverage as a 265 lbs man. Good enough to play the edge, strong enough to plow inside. Knocks people around and hits like a ton of bricks. Could be a real sleeper pick in a good D-line class.