For my first post, I thought I’d discuss the most talked about decision of the 104th Grey Cup. On second down and goal from the two yard line, with time running out in the 4th quarter and down three points, Dave Dickenson elected to run a short yardage roll out pass with rookie Canadian quarterback Andrew Buckley. The play broke down and Abdul Kanneh managed to lunge out, hitting a sprinting Buckley’s heel before he reached the edge and tripping him up for a two yard loss. Calgary was forced to hit the field goal and would go on to lose the game in overtime. Many people have criticized the play call given that Dickenson had at his disposal the CFL’s Most Outstanding Player in Bo Levi Mitchell to throw the ball and Most Outstanding Canadian behemoth running back Jerome Messam to punch it in. The decision has been compared to Pete Carroll’s decision to throw the football instead of handoff to Marshawn Lynch in Super Bowl 49. I’m going to take an unpopular stance here and defend the choice of Dickenson, it was a good play call and one that should have worked but for excellent defence and a missed block on the line of scrimmage.

Before addressing the play itself, I feel obligated to criticize the way in which this play has been depicted by much of the Canadian media. The popular storyline is that Calgary put the ball in the hands of a no-named, untested rookie Canadian quarterback from a USports school who had never performed on this stage before. One media personality described the difference between this play call and Pete Carroll’s as the fact that Pete Carroll didn’t put a Division III quarterback into the game. Not only do I find this to be a thinly veiled degradation of Canadian players and university sports, but also more akin to bovine excrement than a legitimate analysis of the events that occurred. Andrew Buckley is a two time Hec Creighton award winning quarterback, among the best signal callers that have ever passed through the Canadian University ranks. His rookie year was quietly a tremendous affirmation of the ability of Canadian quarterbacks. He beat out an accomplished NCAA Div I quarterback in Bryant Moniz through steady pre-season play to earn the third string position and posted 8 rushing touchdowns in short yardage play, the third most rushing touchdowns in the league behind Messam and Mike Reilly and the most by a Canadian pivot since Russ Jackson. He was the best in the league at doing exactly what he was called upon to do and had scored on a nearly identical play earlier in the 4th quarter. His official status is that of a rookie but Andrew Buckley had long been a camp arm for the Stampeders and actually received play time in the pre-season a year ago before returning to school to finish his USports eligibility. This is a player who is very familiar with what the Stampeders run and who’s attended almost as many training camps as Mitchell. Playing in the Grey Cup in front of 33,000 people was certainly a new experience to him, but Buckley played a nearly flawless game in a Vanier Cup loss in front of 18,000 people in his sophomore year of college. This was a very good player and this is the CFL. Where you played college ball shouldn’t matter once you get here. A Div III quarterback has won a Grey Cup, at five and a half feet tall no less, and CIS quarterbacks have won them too. No one would criticize putting Ron Lancaster or Russ Jackson into a game. The result of this game had nothing to do with the players that Dickenson put on the field but rather how they executed.

The play call was a simple quarterback rollout run, designed to simulate a QB sneak with an interior surge to draw in the defence and then beat them to the outside. Calgary ran a similar play earlier in the game but inserted one key difference here . Expecting the defence to be ready for an outside run, Buckley was giving two passing options. Anthony Parker was in the flat after motioning across the formation and Bakari Grant was running a ten yard in route from the backside of the formation. The hope was that the defence would expect the outside run, focus on Buckley and neglect their coverage assignments, leaving an easy dump off pass for the rookie Canuck. This did not happen. Ottawa defended this play beautifully with excellent pressure, great pursuit and immaculate coverage. Neither Parker nor Grant were viable options for a pass which made Buckley, after a short hesitation, take off for the corner. At this point Buckley has the advantage, he has a slight edge on the defenders with Parker able to block the corner who is alone outside. This play still had very real touchdown potential and would have more than likely resulted in at least a short gain, allowing for the 3rd down gamble that proponents of giving Messam the ball claim as an advantage of pounding the ball. Instead, Abdul Kanneh makes a miraculous shoe string tackle and its game over Calgary. But how did Kanneh get there? To answer that question, we have to go back to before the snap. The Stamps lined up in a tight formation with fullback Rob Cote and Jerome Messam serving as tight ends on the right side. 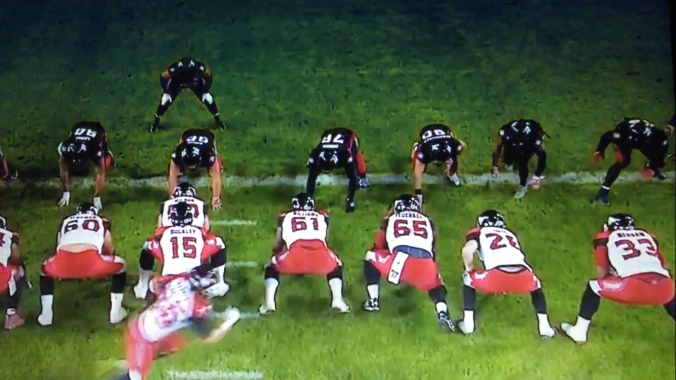 They have a key job to do, sealing the edge for Buckley and ensuring he gets outside. However, they suffer from a miscue. For whatever reason, be it miscommunication, crowd noise or a lack of familiarity with the position, both of these edge blockers are late off the ball. The entire offensive line has made contact with a defender before Cote and Messam are out of their stances. 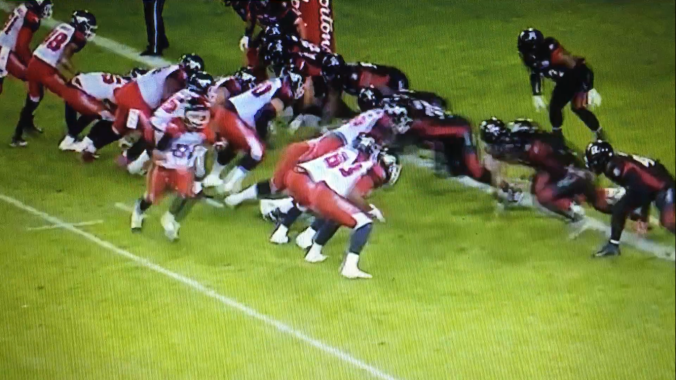 Because of this, the defence gets a jump on the edge and get off the ball before Cote and Messam, taking away any advantage that the offence had in blocking. The way Kanneh describes the play in media reports, one might assume the 185 lb defensive back out muscled a behemoth offensive lineman but in reality he hit 225 lb Rob Cote while his feet were still set. This delay made Cote lose leverage and Kanneh was able to control the outside. 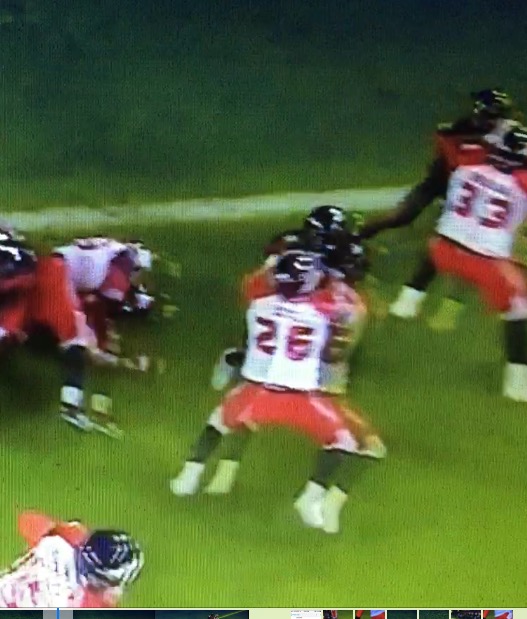 Instead of being sealed inside, Kanneh is able to get off Cote’s block almost as soon as Buckley gets outside the tackles. Not only does this put Kanneh in position to make his heroic tackle but Taylor Reed also pursues through the gap that Cote would have occupied if the block had gone as planned and puts himself in position to make a play had Kanneh been unsuccessful.

Had Cote been able to get off the ball quicker and engage his block with proper leverage, Buckley would have had a clear route to the corner after outpacing Damaso Munoz and an Anthony Parker comeback block would have all but ensured a game winning touchdown. Dickenson would have been a genius, Buckley a hero and Calgary would’ve been the Grey Cup champions save for a split second miscue on a snap count and missed block. Of course, the loss can’t be laid at the feet of Rob Cote, he is a reliable fullback and an exceptional leader for the Stampeders, but on this play he was the victim of a sport which demands perfect execution on every play. Cote is a great athlete but so is every guy who lines up across from him. Give a player like Abdul Kanneh a millisecond and he will make a play. Sure, Dave Dickenson could have thrown the ball with his MOP quarterback or run it with his back field work horse but those plays could have just as easily turned into Mitchell’s fourth interception of the game or an Ottawa defensive stuff from a dominant front that had bottled up Messam. Every play in football has the potential for success or failure and it hangs in a fine balance. So when a play goes awry, more often than not, its the execution not the playcalling.